To share your memory on the wall of Edward Strain, III, sign in using one of the following options:

Provide comfort for the family by sending flowers or planting a tree in memory of Edward Strain, III

Provide comfort for the family by sending flowers or planting a tree in memory of Edward Strain, III

Including his parents, Ed was preceded in death by his grandparents Edward E Strain Sr. and Cora Bradford Strain, Goss and Johnnie Mae Ware Mattox; brothers John M. Strain, Nathan B. Strain, Clifford A. Strain and twin sisters who died at birth.

He is survived by his wife, Barbara Alice Woods Strain, son and daughter in law Jon Michael Strain and Catherine Nolte Strain, grandsons Jon Edward (Ebby) Strain and Christopher Woods Strain of Athens, Georgia; Mother and Father in law , Hal and Teen Woods of Clarkesville; Sister in Laws, Becky Strain of Islamorada, Florida, and Kristy Strain of Tullahoma, Tenn. ; Brother in law and sister in law Bucky and Julianne Woods of Clarkesville, Georgia; a number of nieces and nephews who he cherished; Special chosen brother, Bob Williams of Cornelia, Georgia, chosen sister, Anne Marie Wingate; his law partner and friend, Dennis Cathey and his “family” at Cathey and Strain law office.

There will be a Game Day celebration to watch the Georgia vs Tennessee football game and visitation on Saturday, October 5, beginning at 6:00 pm in downtown Cornelia. All are welcome to set up traditional tailgate or drop in for visitation with family and friends.

In lieu of flowers, memorials can be made to the Strain Family Scholarship Endowment in care of Habersham Rotary Scholarship Fund, P O Box 513, Cornelia, Georgia 30531.

From his earliest days, Ebbie was enthusiastic, inquisitive and full of life but at the same time, mischievous and rambunctious. He grew up in Hogansville, Georgia where his bicycle rides through town with his BB gun or fishing pole were a common sight.

Ebbie graduated from Sewanee Military Academy, Sewanee, Tennessee where he excelled academically and embraced military order and regimentation, skills he displayed throughout his life. He became a member of the distinguished drill team color guard marching in the inauguration parade of President John F. Kennedy. He often spoke of the impact seeing the young president’s suntanned face in the frigid cold with multitudes of cheering Americans hopeful for their country. This experience influenced his undying patriotism.

His ties to his beloved University of Georgia ran deep and wide. His parents met and graduated from Georgia as did he with a BA degree in political science and history. Ed was a member the Gridiron Secret Society. He
pledged Kappa Alpha Order fraternity but could not become fully immersed in campus life as he held various jobs from heavy construction, ditch digging, to meat cutting to support his young family and pay for his education. He always attributed these job experiences with his unique ability to relate to people from all walks of life.
He graduated from the University School of Law where he met his future law partner and lifelong friend, Dennis Cathey. A formidable bond was founded between these two small town boys over hunting, fishing, football and all things young men do.

After law school, Ed served as law clerk to the honorable Lewis (Pete) Morgan of the United States Court of Appeals for the fifth circuit. The US court of appeals is the second highest court ranking only behind the United States Supreme Court. The honor and prestige of this opportunity was shadowed by the wisdom and knowledge he garnered from his one true mentor, Judge Morgan. It was widely believed that Ebbie was his favorite of all the law clerks he had through the years. He asked him to return for a second term and Ed did. His clerkship allowed him to participate in some of the most important federal cases of that era including the desegregation of many school systems in the south in the early 1970’s.

At the time, the fifth circuit sat in New Orleans, Louisiana and he shared many meals and conversations about life and the law with Judge Morgan and the other judges. Ed’s love of New Orleans became a part of his life and he visited often in later years.

Upon leaving his clerkship, he received lucrative offers from some of the leading law firms in the state. Instead, he chose to come to the small Northeast Georgia town of Cornelia to open a practice. The law firm of Cathey and Strain commenced on April Fools’ Day, 1974 with a handshake and a little borrowed money. The pair practiced together with competence, loyalty and fun for over forty years until Ed’s retirement. Throughout his career, Ed served as the voice and protector for the rights of individuals. He was proficient in difficult litigation against major domestic and foreign corporations. Product liability is now a common term but in the 70’s and 80’s it was not and few lawyers practiced it. He was innovative and not intimidated to level the playing field for clients up against corporations with incredibly more clout and assets.

Through decades of practicing law, Ed earned the respect of thousands of clients because of his diligence and compassion. He earned the respect of the judiciary because of his finely tuned conceptual aptitude and intense preparation. He earned the respect of his colleagues and opponents because of his ethics and fairness.
Ed served on the Executive committee and Vice President of the Georgia Trial Lawyer Association, Board of Governors of Trial Lawyers of America, and President of the Mountain Judicial Circuit Bar Association. He was appointed by Governor Sonny Perdue to the Georgia State Licensing Board for Residential and General Contractors. He served for many years on the Downtown Development Authority for the City of Cornelia and served as secretary of the American Heart Association.

Ebbie lived a life of full of past times and passions. Fly fishing, wing hunting, football and hiking were his favored. He never met a dog or cat he didn’t like. His love of nature and the outdoors was fueled by his spirituality and wonder at the beauty of the natural world God created. He kept volumes of journals and writings of his travels and conversations, of books, movies, quotes, all read in the crisp dialog familiar in the writings of his favorite author, Ernest Hemingway. Although his travels and quest for the best adventure took him all over, he most enjoyed taking his boat on the flats of his beloved Florida Keys enjoying his own company.
To better understand his Creator and purpose for living (also a voracious reader) he read the Bible from cover to cover. He read everything written by Reverend Billy Graham. His journals are filled with quotes from the Reverend.

One of his last journal entries reads: “It’s not about whether you win or lose because we are all headed for death, that certain and ultimate loss. Rather, it’s about the struggle of life and how you handle it. Handle it well and you know that you have won in the only way possible. “
Ed Strain has won his last case. He won his last battle and did so convincingly brave and never flinched.

To send flowers to the family or plant a tree in memory of Edward Eugene (Ebbie) Strain, III, please visit our Heartfelt Sympathies Store.

Receive notifications about information and event scheduling for Edward

There are no events scheduled. You can still show your support by sending flowers directly to the family, or planting a memorial tree in memory of Edward Eugene (Ebbie) Strain, III.
Visit the Heartfelt Sympathies Store

We encourage you to share your most beloved memories of Edward here, so that the family and other loved ones can always see it. You can upload cherished photographs, or share your favorite stories, and can even comment on those shared by others.

Posted Oct 04, 2019 at 07:58pm
Thanks Edd for being such a great guy, You took My case to the U S supreme court and won it (Farmer vs Ryder truck lines) helped Me when I needed it, Rest in peace My Friend--Red
Comment Share
Share via:
KJ

Posted Sep 30, 2019 at 09:33pm
Barbara I am sorry for your loss. You and the family are in my payers and my deepest sympathy.. Ed was a very good friend to everyone he met, and a great colleague. He will be missedoing by so many. I am honored to have him as my friend. 💔💔😢🖍
Comment Share
Share via:
J

Posted Sep 30, 2019 at 08:54pm
I think it is fitting that Ed passed away on a UGA off week. This will give him time to get his new sky box ready for Georgia vs. Tennessee next Saturday. Ed was a d... good Dawg!!!
Best to Barbara and the rest of the family.
Jim Kimsey
Comment Share
Share via:
TT

Posted Sep 30, 2019 at 02:20pm
I was fortunate to meet Ed Strain almost 30 years ago. Ed was a great man. Brilliant in his own unique way. He had a great heart and unmatched courage. He was one of the great men on our earth -- and yet we should not honor his memory simply because he was great. Great leaders, great lawyers, courageous soldiers, and wonderful orators, often use their gifts for wrong reasons. We will honor, love, and respect Ed because he used his power for the good of mankind. That is what made Ed great, at least in my eyes. His light will always shine in my memory.
Comment Share
Share via:
VS

Posted Sep 30, 2019 at 09:21am
Please remember that I love you and care about you. Do not hesitate to call on me for anything; with love and hugs. 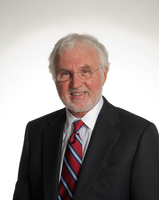