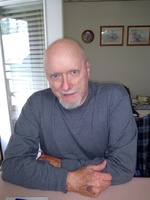 Mr. Krefft passed away in the comfort of his home and surrounded by loved ones on Tuesday May 12th, following an extended illness. He was born on the 9th of April 1945 in Chicago, IL to Calvin and Carol Krefft.

Cal served with the Army as a UH-1 ‘Huey’ Helicopter Crew Chief in Viet Nam and after a break in service he enlisted in the U.S. Coast Guard Reserve, where he rose to the rank of Senior Chief Boatswain’s Mate before he retired. He was well respected by his senior officers and lower enlisted as well. Cal’s family has a proud history of military service. His father, Calvin Sr., served on a hospital ship in WWII, his younger brother also served in the Coast Guard in the 1980s and his eldest son has served with the Army in Afghanistan. Cal was asked recently if there was anything that he needed help with, his first request was to have his flagpole repaired so that he might again fly Old Glory and the Gadsden Flag. The flagpole was fixed within two days.

As well as serving his country with the Coast Guard he loved being a family man, raising two fine sons with his wife, Sharon, to whom he was married 53 years. Cal loved flying, motorcycles, reading, boating, football, baseball and, after working in Germany for four years, soccer. He was a huge NASCAR fan. (Go Dale Jr!)

A Celebration of Life Ceremony will be held at the Cornelia VFW Post, at a date to be determined later.

All rights reserved. This obituary is also archived at obittree.com