To share your memory on the wall of Alan Swan, sign in using one of the following options:

Print
Alan George Swan, 75, a resident of The Orchard for the past four years, died on December 1 at Habersham Medical Center, following a heroic battle with cancer and pneumonia.

Alan was born in Buffalo, New York on May 8, 1943. He attended ... Read More
Alan George Swan, 75, a resident of The Orchard for the past four years, died on December 1 at Habersham Medical Center, following a heroic battle with cancer and pneumonia.

Alan was born in Buffalo, New York on May 8, 1943. He attended Colorado School of Mines in Golden, and graduated from Westminster College in New Wilmington, Pennsylvania, with a degree in political science. He later attended Georgetown University majoring in Latin American area studies.

Alan was a retired Foreign Service officer with USAID, Department of State. His first tour overseas was to Saigon during the war. He was accompanied by his wife and two daughters to assignments in Quito, Ecuador; Cairo, Egypt; and Monrovia, Liberia. During his thirty year career, he worked with the Office of Foreign Disaster Assistance where he was widely respected for his thoughtful, fact based opinions and compassionate work for the victims of disasters. In 1996, he was awarded the Distinguished Career Service Award by the USAID Administrator.

Prior to coming to live in Clarkesville, Alan resided in Reston, Virginia and on the Eastern Shore of Virginia. Alan was a friend of Bill W. for more than thirty years.

Alan was an adventurer who explored many parts of the world including Mongolia, the Congo, Kenya, Cambodia, the Shetland Islands, the Outer Hebrides, and the Falkland Islands. A fan of cruising, he and his wife sailed across the Atlantic and the Mediterranean, down the Amazon to Manaus. They sailed twice around Cape Horn and to within seven hundred miles of the North Pole to Svalbard, Norway.

Alan was the son of the late Arlene Dobmeier and Bernard Swan of East Aurora, New York.

Alan is survived by his wife of more than 51 years, June, two daughters: Lizzy Johnson and her husband Dirk of Demorest; Nicole Gore and her husband Glenn of Reston, Virginia, and one grandson Jack Johnson.

No formal services are planned.

An online guest register is available and may be viewed at www.habershamcrematory.com

To send flowers to the family or plant a tree in memory of Alan George Swan, please visit our Heartfelt Sympathies Store.

Receive notifications about information and event scheduling for Alan

There are no events scheduled. You can still show your support by sending flowers directly to the family, or planting a memorial tree in memory of Alan George Swan.
Visit the Heartfelt Sympathies Store

We encourage you to share your most beloved memories of Alan here, so that the family and other loved ones can always see it. You can upload cherished photographs, or share your favorite stories, and can even comment on those shared by others.

Posted Dec 21, 2018 at 10:50am
My wife Nancy and I are very saddened to just realize on Dec. 21 that Alan passed away in early December. We very much enjoyed getting to know the Swans when we both served in Liberia for the U.S. Agency for International Development. I was the mission deputy director and Alan was the Executive Officer. With his in-depth knowledge of USG regulations amd his soft-spoken, gracious but firm manner, he was always, for me, the IDEAL of what a USAID Executive Officer should be - my role model for the position that I used when I later coached new Exec Officers joining the foreign service.

We will very much miss his smile and his thoughtful insights.

Our condolences and love go out to his loving wife, June and their children. 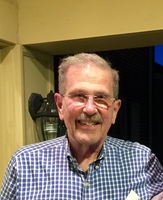